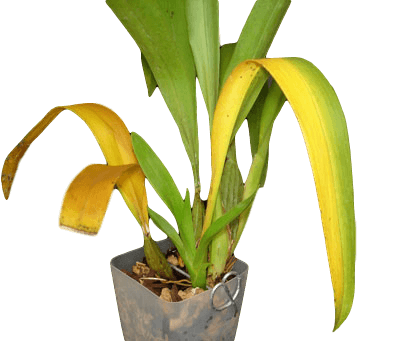 Frequently we are asked about yellowing leaves on an orchid. The questions are all roughly the same - is my plant sick, is it dying, what can I do to prevent the leaves from yellowing? Luckily, yellowing leaves are common and not always something to worry about. Below we will walk through some common causes of yellowing orchid leaves and what, if anything, you should do about them.

It is important to understand the natural lifecycle of an orchid. The plant grows new leaves and/or new pseudobulbs and from this new growth comes the new bloom. The older leaves, and older pseudobulbs, over time will die back. In the same way that new growth comes, so will old growth wither and die. This is normal and natural. Sometimes a stress, such as repotting, will cause an orchid to lose a leaf or two on an old pseudobulb. This is entirely normal and is not a cause for concern. The orchid in the picture, an Oncidium, is doing just that. After repotting it has chosen to shed the leaves on its oldest pseudobulb (often called a "back bulb"). It is also choosing to shed one leaf on the second oldest bulb, something that can naturally happen with newly repotted oncidiums. The good news is, as is clearly seen in the photo, there is beautiful new growth that accompanies the natural die back of the older leaves. From this new growth will come our next bloom.

The orchid in this photo was repotted as the new growth began in our Oncidium Seedling Imperial Orchid Mix and is a 3.25" clear square pot with a plastic pot rhizome clip to hold it in place as it forms new roots.

Phalaenopsis raised in humid greenhouse conditions and then sold and brought to a dry home environment may lose a bottom leaf or two. Again, this is not cause for alarm but is perfectly normal. We've often said as a broad rule of thumb that Phals will have roughly 1 leaf for every 10% of humidity. In a dry home at 40% humidity, 4 leaves are not unusual where in a greenhouse at 80% humidity one might see 8 or more. During the transition from the grower's environment to a home an orchid is likely to adjust accordingly and this includes dropping leaves. That's why humidity trays are so important in a home environment.

A word of caution is warranted when repotting an orchid grown in sphagnum into a fir bark mix such as the generic "orchid bark" mixes sold in the big box stores. Phalaenopsis tend to dislike going straight into fir bark when they were used to sphagnum and their roots and health may decline rapidly soon after repotting as seen by wilted, wrinkled or yellowing leaves. The opposite does not hold true, Phals moved from fir to sphagnum mixes typically adapt easily. We recommend repotting Phals into one of our 5 Phalaenopsis mixes, all of which are ideal for Phals regardless of what they were originally grown in. We do not recommend potting an orchid in fir bark unless it was originally grown in fir bark.

It is time to worry when signs of rot are present such as dark slimy spots. The best defense against such rot is Physan 20 applied to the affected leaves at a rate of 1 Tablespoon / gallon of water.

We are also asked about removal of these old leaves, about which there are 2 primary schools of thought. The first is that the orchid will shed the leaf naturally and you need to do nothing but wait for it to do so. In this process the orchid will naturally seal off the area where the leaf had attached and nothing need be done. The other school of thought is that the yellowing leaves are unsightly and should be removed. Removing them earlier than the orchid will naturally shed them requires cutting the leaf off. When cutting on an orchid we always recommend the use of a clean tool (to avoid the possibility of spreading virus from one orchid to another) and applying cinnamon (the common household spice) to the cut area as a preventative measure against any opportunistic infection that would otherwise try to set in.