Skip to content
Your Cart
Free Shipping Over $99
One Week Only -15% Off Slotted Pots Use Code SLOTS
New Deals on Popular Products See All Deals
Free Shipping On All Orders Over $99!* 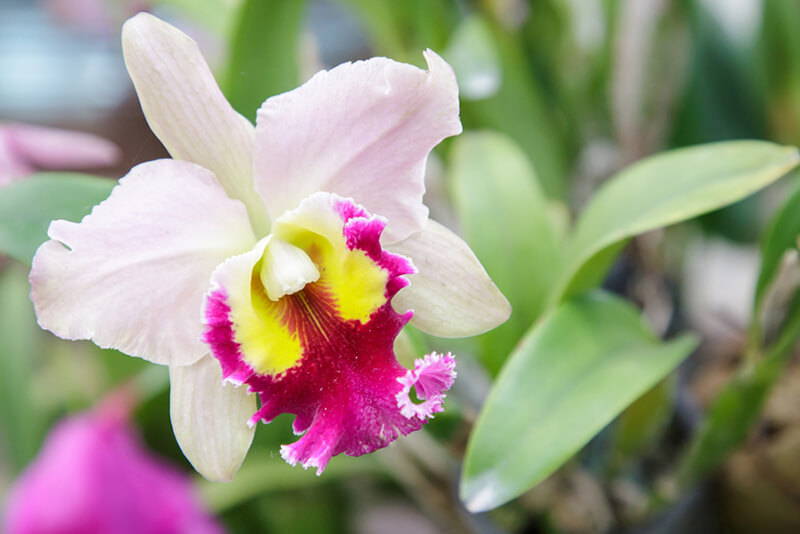 Close Up OF a Cattleya Bloom

The regal Cattleya, also known as the "Corsage Orchid" was extremely popular as a cut flower in the United States in the 1950's and yet its history dates back to the early 1800's when William Cattley first bloomed this orchid in cultivation. Large fragrant blooms are the signature of this classic orchid. The color "orchid" comes from the color of many Cattleya although the genus actually includes a wide variety of colors. The genus Cattleya is native to Central and South America.

The culture of the Cattleya orchid involves bright light while the pseudobulb is maturing. Their light demands can prohibit successful blooming in a home unless supplemental lighting or summers outdoors are provided. The term "Cattleya culture" is often applied to a group of related genera that have the same basic culture needs as Cattleya and are often crossed with Cattleya to create delightful hybrids. These related genera include Potinara, Laelia and Brassavola. 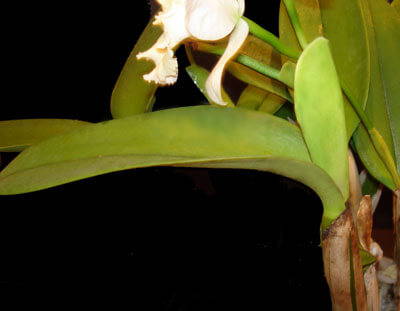 The Cattleya is often in bloom for Mother's Day in the spring but many bloom in the fall as well. As the pseudobulbs on our Cattleya mature we begin to look for the bloom sheath that emerges from where the leaf meets the top of the pseudobulb. The sheath will cover the developing bloom as it matures. Eventually the bloom spikes push their way through the covering sheath and develop into flowers. In some cases a sheath may form without buds or the buds may appear much later. Usually the developing buds can be seen, or at least felt, through the sheath. 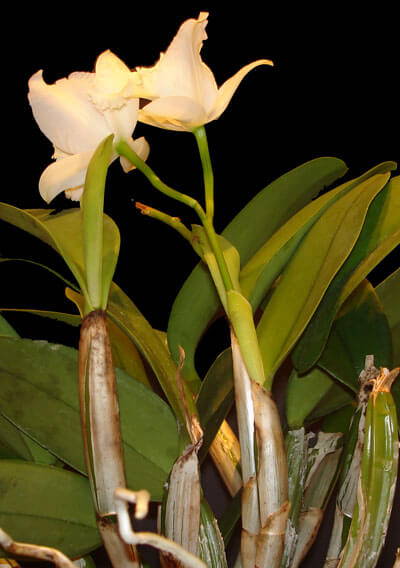 As the pseudobulb matures the outer paper-thin layer turns brown and/or white and may begin to peel. This layer is called a 'sarong' and it is perfectly fine to let it be or to peel it off as you prefer. Peeling off the sarong eliminates one place where bugs may try to hide.In some cases it can be beneficial to open the top of the sheath so that the developing bloom does not rot from excessive moisture within the sheath.When the time is right the developing buds will push their way up through the sheath extending upward into a cluster of fragrant blooms. 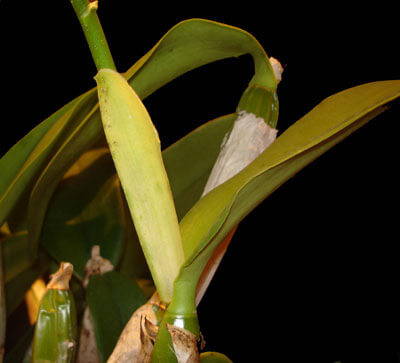 Once the bloom is gone and the flowers have fallen off the sheath will begin to yellow. At this point we can cut the sheath and bloom spike off just above the leaf.The pseudobulb will continue to provide sustenance to the plant for at least a few seasons, even after it becomes leafless. Think of these old pseudobulbs as energy storage tanks for the plant. Once a pseudobulb has shrunk and become brown, it should be removed at the next repotting by cutting it off at the rhizome.Next we will be looking for the next pseudobulb to begin to grow at the base of those that just bloomed as the growth cycle starts once again.