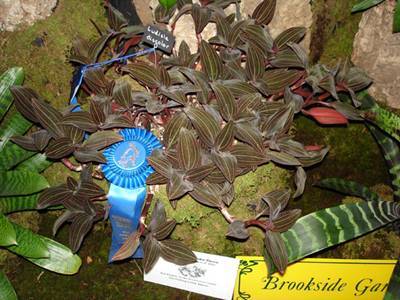 Our Prize Winning Jewel On Display

This is a story of the little jewel orchid that grew up to be a champion.

I first saw my little Ludisia Discolor on the out of bloom table at a local floral nursery. It was after the holidays, after the normal blooming season for Ludisia here in the Mid Atlantic area and the nursery was clearing out the extra orchid stock that had not sold. I certainly didn't need another orchid; my collection was already bulging beyond the capacity I had to hold them all. Velvet-soft burgundy striped leaves caught my attention out of the corner of my eye and I walked over to have a look. The little Ludisia was sitting there looking quite small next to the taller Dendrobiums and Cattleya. It was just a little sprig of a thing, one little shoot coming up from the base. The color of the leaves were just amazing, a rich green-burgundy-bronze, very unique, nicer than any jewel orchid I had seen. I smiled to myself as I wondered just what "out of bloom" meant for a jewel orchid; after all we grow these for the beauty of their foliage. It was showing signs of stress, from having sat there in the nursery for some time. 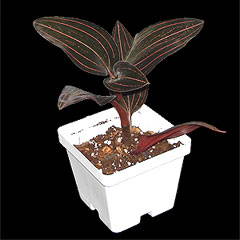 "No, I can't do it", I can't take home yet another sad little orchid that needs to be nursed back to health. Haven't I done that enough times already? I walked away and picked up whatever it was that I had come to the nursery for. "But those leaves" I thought again, and went back to pick up the scrawny little jewel orchid. After all, it was only $4.00. That was 5 years ago.

The little jewel came home with me to the stress of adapting to yet another new environment. It sat there sulking for months, hovering near death for a while then rebounding a bit. I moved it from spot to spot, trying to figure out what it wanted. All along I knew what it really wanted was to be bigger, to have some resilience and strength in size. Finally it found a home it liked on the top back shelf of the greenhouse. It started to branch out, something it had never done before. The new leaves on the new branches were just as stunning as the others. I was superstitious about its long awaited success, and refused to move it from its perch for a very long time. It had done me the favor of finally starting to grow and I was certainly going to return the favor by guaranteeing its spot on the top shelf. After all, it had moved too much as a little guy. 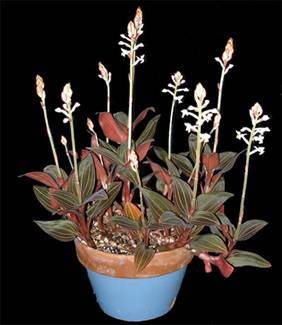 Finally one spring day it was time to repot and the little Ludisia moved up to a 5" pot. I used a classic terrestrial orchid blend of peat, small charcoal, perlite and some granite chips. The following winter it bloomed for the first time in my care! I was delighted to see that it was finally happy enough to bloom, having grown to a good healthy size. While the little white blooms are pretty, the foliage steals the show. I decided then and there that there is no such thing as an "out of bloom" Ludisia Discolor.

By the following spring it was once again overflowing its pot. Clearly its aggressive growth habit was going to require a substantial pot to hold it. What it needed more than anything was a good deal of surface space to roam around in so I chose a 16" bulb pan for it. Moving an orchid up more than an inch or two of pot size goes against my better judgment. Looking at the wingspan of this orchid and seeing how the new growth could bend into the medium and form roots, I decided to go with my instinct and choose the seemingly enormous pot. 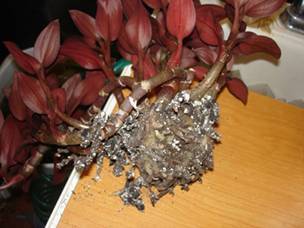 As the repotting process evolved it was evident that the once little sprig of a plant was going to fit nicely into this wide bulb pan. Amazingly it settled in to fill up the entire top surface of the pot! The orchid looked relieved to have finally made it into a big new pot, filled with fresh medium and plenty of room to grow. I filled in carefully around each growth with rePotme Jewel Orchid Classic Orchid Mix. Each place where the plant had grown a natural arch to dip down and form roots I used U clips to secure each new sprout so that it was touching the medium. 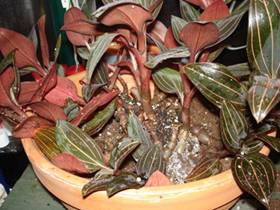 Gently I moved it to a plant stand in the dining room window. There it would be able to settle into its new mix without the stresses of the greenhouse just yet. Shortly thereafter it moved back to near its favorite perch, having outgrown the ability to return to its home on the top shelf. It was too big now, too heavy in particular, so a similar suitable spot in the sunny back corner of the greenhouse was found. I was not about to allow it to wander out of this big pot! Each sprig that escaped was carefully cut and secured in a bare spot in the pot with a wire U clip. This was a labor of love, as so many of the tending tasks with orchids are. I'd seen scraggly Ludisias before and wanted this one to be dense specimen, a blanket of those incredible colored leaves. 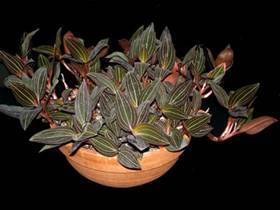 By the fall of 2007 the little Ludisia sprig from the out of bloom table had grown into a beautiful mass of velvet leaves. It was simply too beautiful to live exclusively in the greenhouse. Surely it would be able to become a houseplant now; it was big, strong and resilient. I moved it to a new home on a humidity tray in its own window. It settled in nicely to its new environment without even missing a beat. As it continued to thrive I had to let it sprawl over the edges of the pot having run out of bare spots to tuck sprigs in. Recently a cutting from this plant was snapped up in the early rounds of the orchid swap at our local orchid society. I guess I'm not the only one who loves those incredible leaves. The little cutting looked almost as small as its mother plant had been several years ago.

Our orchid club put up a display at the National Capital Orchid Society fall show in October 2008. As I surveyed the orchids that I would have available to include in the display, the Ludisia didn't make the first cut. After all, it was out of bloom. Later, as I saw it sitting there so pretty in the window I figured it would at least make good ground cover for the display, after all, it is an orchid, in bloom or not. It fit in well, in an unremarkable spot at the bottom of the display on the simulated jungle moss floor.

Imagine my delight to be awarded first place for amateur Jewel Orchids and a trophy ribbon for "Best in Show, Amateur, Miscellaneous Genera"! The little Ludisia orchid had grown up to be a beautiful champion, and to remind us that sometimes there's no such thing as "out of bloom" for a jewel orchid.