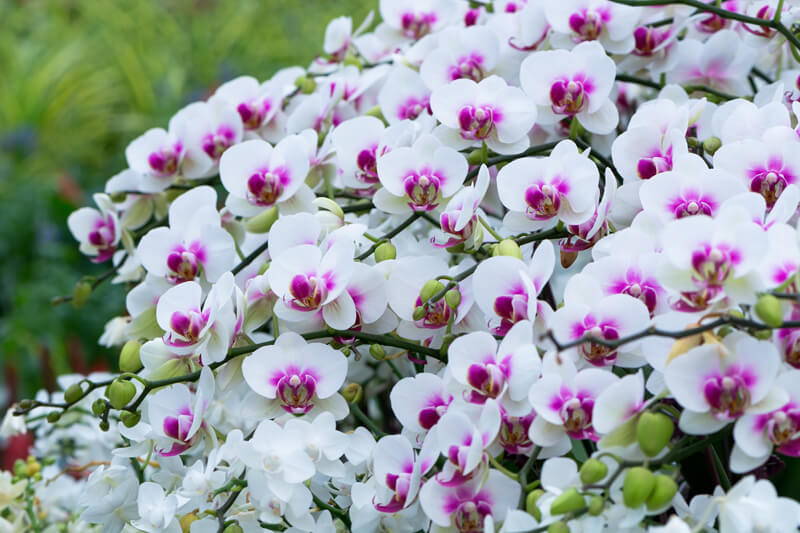 Orchids, like most blooming plants, bloom in seasons. The best way to ensure that your orchid will bloom again after its first blossoms fall off is by taking proper care of the plant during its dormant non-blooming season. By taking the proper measures at the end of one blooming cycle, you can set the stage for the next set of showy blossoms and ensure that your orchid blooms again and again every year.
Each orchid species has a natural blooming season. In most orchids, including the highly popular Phalaenopsis orchid, the growth period during which new leaves emerge begins during the summer months. By autumn, spikes and flower buds begin to appear, and the plant will normally bloom around late autumn, with the blooming period typically ending around the end of winter or early weeks of spring. Although many commercial growers force plants to bloom out of season so they can sell flowering orchids all year round, once your orchid is living at home, you cannot expect it to bloom all year round, as it will naturally revert back to its natural blooming cycle. Most species bloom once a year, with blooms lasting up to several months. Once the flowers begin to drop off, a few more blossoms might appear on the same spike, but this does not always happen. The period of dormancy or non-blooming in most orchids typically lasts about 6 to 9 months, and if your orchid is properly cared for with all of its essential needs met, it will naturally bloom again on its own.
To make sure that your orchid is happy and healthy enough to re-bloom each year, take the following steps to ensure optimal blooming conditions:

1) Delay Repotting Until After Your Orchid Finishes Blooming

While it may be tempting to repot your orchid in fresh mix when you first buy it, it’s really not recommended as it can cause the bloom to drop prematurely. Once the last bloom drops is usually the best time to repot your orchid as that is when most orchids begin their active growth phase putting on new roots and leaves in preparation for the next bloom. Make sure you cut dead roots off with a sterilized scalpel when re-potting. Sterilize your scalpel before using it by soaking it for 10 minutes in a Physan 20 solution. Choose an orchid pot to provide ample water drainage, but make sure it’s not much bigger than the actual roots of the plant. Orchids don’t need a big pot to grow in, in fact what they really need is to feel snug in the pot and be able to get physical stability by wrapping their roots around the inside of the pot. Your new pot should be no more than 1 inch bigger than the pot it came out of. Use a specialized potting medium for orchids to provide the proper growing environment for this epyphyte or “air plant,” as orchids do not grow in regular soil.

It is important to make sure that your orchid truly regenerates during its dormant period, and you can help take stress off the plant by removing old, dead spikes once flowers fall off to help the plant retain more of its nutrients and energy. Use tools that have been sterilized in a Physan 20 solution to trim each spike to about one inch above the lowest node on the stem. Any dead stems should also be trimmed away. Always cut spikes and roots diagonally to encourage growth.

While orchids need lots of humidity, they only need to be watered about once a week or every 5-12 days, because as epiphytes, they prefer to absorb humidity from the air. A great way to provide the required humidity for your orchid is to mist the plant periodically. Orchids also love to live in large groups or clusters of several orchids so that together they can create their own little ecosystem. Using a humidity tray underneath your orchids will ensure that they have ample humidity without risk of leaving the roots in standing water, which can be dreadfully harmful to orchids. When you do water you orchid, make sure all water drains out of the bottom of the pot, and the potting medium dries on top between each watering.

Because orchids bloom according to natural seasons, they will typically respond to changes in ambient temperature. When they sense that temperatures are cooling down in the evening, toward late fall, they begin their blooming cycle. To encourage this, move your orchid to an environment where nighttime temperatures naturally drop a bit. Placing the plant on a windowsill may accomplish this, or consider turning down the heat in your home in the evening during winter months.

To learn more about caring specifically for your particular orchid, please see our informative pages on Phalaenopsis Orchid Care and our directory of orchid care articles, depending on what type of orchid you have. These pages provide all the basic information you need to keep your beautiful orchids healthy, happy, and blooming!